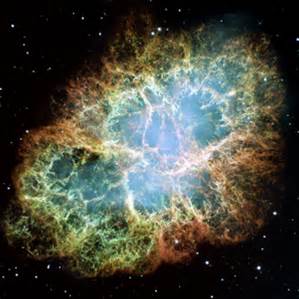 The Universe started out with hydrogen, helium, and not much else. Then exploding nuclear reactors (stellar supernovae) polluted space with chemical elements, which formed into new stars, planets, and people. On July 4, 1054, fireworks lit up the sky (both night and day) as a star was seen exploding in the constellation Taurus. The resultant debris field, known as the Crab Nebula, is a beautiful, complex structure that can still be seen shining 75,000 brighter than the Sun. It was initially called the “Rosetta Stone of astronomy” because of what it could tell us about our origins, but then it became the “red herring of astronomy” because nothing about it seemed to make sense. Now, by utilizing hundreds of thousands of data measurements obtained at the Michigan-Dartmouth-MIT Observatories in Arizona and the McDonald Observatory in west Texas, along with tens of thousands of computer simulations, students have been able to map the nebula in ways that allow us to understand how elements formed and the explosive event that produced them. In this talk, we will discuss supernovae in general, how the Crab Nebula works, and how it made the elements carbon and sulfur (necessary for life as we know it), nitrogen and oxygen (major constituents of the air we breathe), and nickel (surprisingly abundant in the Crab Nebula and makes holes in our pockets).

Our speaker is Dr. Gordon MacAlpine a retired astronomer, physicist and a member of the EVAS club. He received a BA in physics from Earlham College and a Ph.D. in astronomy from the University of Wisconsin. After a stint at the Institute for Advanced Study in Princeton, NJ, he joined the faculty at the University of Michigan where he was a Professor of Astronomy until 2000. Then he accepted the Zilker Distinguished Professor of Physics chair at Trinity University in San Antonio, TX, where he continued teaching astronomy, physics, and environmental science until his retirement in 2012. Gordon and his wife, Barbara, recently moved to Estes Park.

The observatory is just north of the high school at 1600 Manford Ave. Park in the teacher’s parking lot adjacent to the observatory. The doors will open at 7:00pm and the meeting will start at 7:30pm. The presentation, including a question and answer period, lasts about an hour. After the presentation, weather permitting, we will look through the new 16 inch dome telescope at various celestial objects. Information about the meeting can be found on the observatory website at: www.AngelsAbove.Org